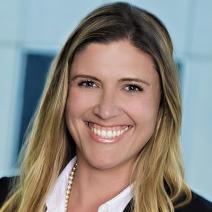 Ms. Lawrence brings over 15 years of experience in banking. Ms. Lawrence currently serves as Chief Operating Officer of First Foundation Bank where she is responsible for overseeing all deposit, treasury management and operational activities for the bank as well as designing and implementing service delivery frameworks for the company. She manages the enterprise delivery, business intelligence, and systems architect teams. These teams work to improve the scalability of systems and efficiencies in all processes by leveraging several technologies as well as forming a data warehouse to centralize information from several disparate systems. Alongside her team, she helped develop and now manages First Foundation's digital bank channel.

Ms. Lawrence was formerly the Senior Vice President of Commercial and Specialty Deposits at Umpqua Bank, which merged with Sterling Savings Bank in April 2014, where she led the team of commercial and specialty deposit bankers. Prior to that, Ms. Lawrence served as Executive Vice President, Chief Banking Officer at Opus Bank. In that role she oversaw and managed four banking divisions, including commercial business, income property, residential, and retail. She additionally held the role of Senior Vice President, Director of Sales at Opus Bank. Previous responsibilities include roles as Vice President, Relationship Manager at both Sunwest Bank and Vineyard Bank.

Ms. Lawrence earned her Bachelor’s degree in Communications from Northwestern University and Master’s degree in Business Administration from University of California, Irvine. She also graduated from Pacific Coast Banking School with honors in 2018. Ms. Lawrence received the honor of being named to American Banker's Most Powerful Women in Banking: NEXT List in 2019. She has also been named to the Orange County Business Journal’s OC500 list in both 2019 and 2020, as one of Orange County’s Most Influential Individuals and was awarded the OC Metro “40 Under 40” Award. She currently serves as a board member on the Mater Dei High School’s Monarch Foundation and is the Juvenile Diabetes Research Foundation’s Orange County Fund-A-Need chair.